The Cost of Compassion 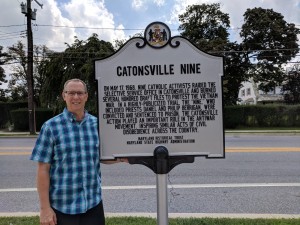 This sign, posted on the grounds of the Public Library in Catonsville, MD (a western suburb of Baltimore), was placed in May of this year. It notes an illegal act of civil disobedience resulting in the destruction of federal property that occurred nearby 50 years ago.

And it is a sign that gives me inspiration and pride.

To me, this sign commemorates compassion over policy, conviction over power, people over politics. One of the slogans spoken during this protest involving the burning of 1-A draft records stolen from the Selective Service Office located across the street at the time was “Burn Paper, Not Children,” prioritizing the victims of the war over the politics.

And two of the nine involved in this protest were my relatives, my Uncle Tom Melville and my Aunt Margarita Bradford Melville. Their voices of ethics and morality have been part of my family history for well over 50 years, and have helped shape many of my own perspectives and priorities.

Their story involves time as missionaries in Guatemala in the late 1950s and 1960s, where the voices of the impoverished peasants in the mountain regions struck a deep chord of compassion in them. Listening to these oppressed people, and recognizing the injustice that was foundational in their culture, they stood with them during a revolution in Guatemala. This triggered a response from the Guatemalan government, the US government, and the Roman Catholic Church. Each of these institutions condemned their stance and took action against them. Tom and Marge’s commitment to listen and to act with compassion resulted in their expulsion from Guatemala, excommunication from the Catholic Church, and threats from terrorist groups.

Yet their persistence in living with the priority of compassion continued to cost them. Their action in Catonsville in 1968 resulted in a court conviction and time in federal prison. They have been vilified, ridiculed, and scorned by many. Yet they have been models of “the cost of compassion” for me and many others.

This sign posted in Catonsville, MD is a reminder to me that compassion takes courage. Listening bears a cost. And still that is what we are called upon to do.

One thought on “The Cost of Compassion”